Giacomo Jacques Behar is an attorney licensed to practice law in the state of California since 1993 and a Certified Specialist in Immigration & Nationality Law by the Board of Legal Specialization of the California State Bar. He has over 23 years of practicing experience in all aspects of U.S. Immigration and Nationality law. Giacomo Jacques, a world traveled polyglot, is FLUENT in 7 languages: French, Spanish, Italian, German, Turkish, Hebrew and of course, English. As the founder of Behar International Counsel, PLC, a full-service immigration law firm active throughout the entire United States & worldwide Giacomo caters to the immigration needs of his clients in most of these languages on an almost daily basis 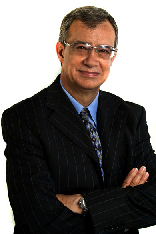 Giacomo, himself an immigrant and a naturalized U.S. citizen, was born in Istanbul, Turkey, to an Italian father and a French-speaking mother. Prior to coming to study in the U.S in 1981 Giacomo lived, studied and worked in Turkey, Israel, England, France, Italy and Switzerland. After arriving in the U.S. Giacomo, a native Spanish speaker, spent considerable time in Mexico almost every year.
Prior to his arrival in the U.S. in September 1981, Giacomo completed his linguistic studies at the Interpreters’ School in Zurich, Switzerland, where he was trained as a translator and conference interpreter. Giacomo also worked for various regional Swiss tourist authorities. He later received a Bachelor’s degree in Business Administration, as well as Masters in Business Administration (MBA) in Finance from the U.S. International University in San Diego, California (1983 and 1984). In December 1992 Giacomo received a Juris Doctor (Law) degree from the California Western School of Law in San Diego, California.
As an experienced family and business immigration lawyer in the U.S., Giacomo is admitted to practice before the California Supreme Court and the United States Court of Appeals for the Ninth Circuit. Regularly commuting between his residences in San Diego, as well as Los Angeles, Giacomo maintains extensive contacts with the business and legal communities in Los Angeles, Orange County and San Diego and actively caters to all the immigration needs of Southern California residents, as well as those of immigration clients across the U.S. & worldwide.
Giacomo has been a member of the American Immigration Lawyers Association (AILA) since 1993 and served as the Chairman of its San Diego chapter’s liaison committee with the Immigration Service’s California Service Center in Laguna Niguel, California. He is also an active member of AILA’s Rome and Mexico chapters.
Giacomo dedicates himself to all aspects of U.S. immigration law, including employment, corporate and investor visas, deportation defense, political asylum, family immigration matters, as well as representing clients at U.S. embassies and consulates worldwide. We serve a highly diverse clientele from all around the world, over 45 countries in total.
Lawyer Giacomo Behar | Top Attorney Immigration
Giacomo is a frequent lecturer on U.S. Immigration law issues to numerous ethnic and multi-cultural associations across California, Mexico, Europe, Turkey and Israel.
Tatyana & Giacomo Behar International Counsel, PLC - Immigration Attorney San Diego

I highly recommend Behar International Counsel. He is an exceptional attorney who is dedicated to his work and has a great knowledge on immigration. He is also very clever and can help you understand the complicated issues that you are dealing with. His ability to listen and advise for difficult Male Vawa Case. My case was very challenging to get an approval and he helped me to get my green card. He took my case and worked with me with such professionalism and care that you would only find in exceptional lawyers.

Best immigration Lawyer in San Diego!!! Behar was raccomend to me by a dear friend. Absolutely first class from start to finish. Can’t believe it, in a just four months Behar was able to renew my 10 years green card .I sincerely recommend Mr Behar law firm as the best place to discuss anything immigration or business.First and only choice i also had different immigration lawyers in my past nobody like him.Thank you for changing my life.

I sent two questions in the past 2 years because my daughter's I94 expired ( more than 16 months). She is 15 years old. Lawyer Giacomo replied that's how i found him. After the first consultation, i decided to take Giacomo's advice and hire him. He suggested us to go to Mexico and come back. He went there to talk to the supervisor of CBP first and then asked me to fly to his office and went to the Mexico land port. I am so happy i made such a great decision hiring the lawyer Giacomo. He is so knowledgeable and knows exactly what he is doing, and at the same time, he didn't over-promise but telling me the whole picture. My daughter came back from Mexico and got her I94 renewed another 24 months. Such a huge relief ! If you have any immigration issues, Lawyer Giacomo is your BEST CHOICE!!!